Irma Castro and Delia H. Talamantez to be recognized for their legacy and vision at the organization's 50th Anniversary Ball on May 11 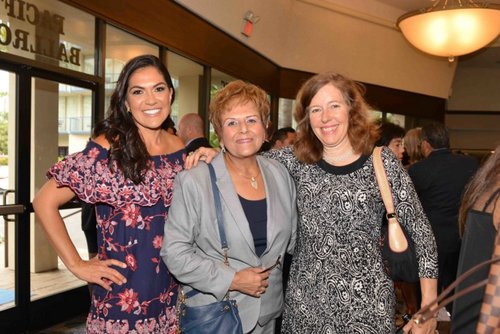 "As we celebrate our 50th anniversary, it's only fitting to honor two remarkable women who have blazed trails as advocates for equal rights and better access to opportunities for many in our community," says Nancy Maldonado, CEO, Chicano Federation of San Diego County. "Irma and Delia's inspiring work truly embodies the spirit of the Chicano Federation."

As a founding member of the Chicano Federation in 1969, Castro made a choice early in life to dedicate herself to public service and social justice. As a result, she propelled the Civil Rights and Chicano Movements locally in San Diego as a community activist. A native of Barrio Logan and a current resident of Spring Valley, Irma grew up in an activist family, spending much of her childhood on picket lines. She went on to earn a master's degree, along with a prestigious research fellowship at the Massachusetts Institute of Technology (MIT). She was one of the first professors of Chicana/O Studies at San Diego State University (SDSU) and the first Chicana to serve on the Mexican American faculty at SDSU. Castro has been a champion of the Chicano Federation since its inception. When the Federation officially incorporated as a non-profit community-based organization in September 1969, she served as one of the signatories. Castro helmed the organization as its executive director from 1979 through 1991, navigating growth and leading the organization to where it is today.

During her tenure as executive director of the Chicano Federation, Castro also helped spearhead the Vista Serena Senior Housing Project, which began in 1985 and was completed in 1993. This was the first affordable housing project the Federation undertook. Due to her efforts, the Federation currently leads a portfolio of nine properties throughout the city of San Diego, including Barrio Logan, City Heights, and South Park neighborhoods. A passionate proponent for ensuring members of our community have safe and affordable places to live, she has served on the board for the Vista Serena Development Corporation since 1995. In her role, she handles the approval of budgets, approval of major improvement costs, and officer elections.

Castro has worked and served on the boards for other community organizations, including:

Talamantez, a resident of the Banker's Hill neighborhood of San Diego, has exemplified the mission of the Chicano Federation to create and promote empowering opportunities for our diverse community through her extensive professional and community activities.

She served for thirty years as director of the Staff Affirmative Action/Conflict of Interest Office, as well as chief campus officer to Affirmative Action-Vendors and Staff and Special Employment Programs at the University of California, San Diego (UCSD). In her Conflict of Interest role, she evaluated and monitored campus compliance with university, state and federal regulators. She also advised administrators, faculty members, supervisors and employees on conflict of interest issues and provided policy interpretation and technical assistance to insure compliance.

In her Affirmative Action role, she represented the campus with the intent of promoting the campus philosophy on Affirmative Action. She developed, directed and coordinated the implementation of policies and programs that enabled people of color and women to have better access to employment opportunities. Because of her efforts on campus, people from all backgrounds and women received better access to employment opportunities and training programs.

Talamantez has served on the boards of over 25 community organizations, including:

She has been the recipient of numerous accolades for her work, including:

The Chicano Federation was established in 1969 by civil rights advocates to advance some of the most important social issues facing the Chicano community. Fifty years later, the organization has evolved, and provides vital social services to tens of thousands of San Diegans across diverse ethnic, geographic and socio-economic backgrounds.

The Chicano Federation's 50th Anniversary Ball is the agency's largest fundraiser of the year and is made possible through the generous support of signature sponsor, the Sycuan Band of the Kumeyaay Nation and premier sponsor, Southwest Airlines. Thomas A. Saenz, president and general counsel of the Mexican American Legal Defense and Educational Fund (MALDEF), is the event keynote speaker. Danitza Villanueva, publisher of Giving Back Magazine, will serve as mistress of ceremonies. Organizers aim to raise $250,000 to support the Chicano Federation in meeting the community's ever increasing needs for quality child development programs, affordable housing, and additional programs and services for families in San Diego County. For tickets, visit www.chicanofederation.org.

The funds raised at our 50th Anniversary Ball will help the Federation scale our programs to make an even bigger impact to provide a safety net for the youngest and most vulnerable across San Diego County," says Maldonado. "We are grateful for the support from our honorary committee, board members, and community advocates who have stood by us and will support our important advocacy work for generations to come."

ABOUT THE CHICANO FEDERATION OF SAN DIEGO COUNTY

The Chicano Federation was established in 1969 to provide a variety of comprehensive, neighborhood-based services to underserved youth, families and seniors across San Diego County. In its early years, the Chicano Federation was led by a tireless group of advocates dedicated to seeing advances in civil rights and civic participation. Today, those strong roots empower the Chicano Federation to serve diverse populations throughout San Diego County with programs that help low-income children and families access vital and often life-changing services and obtain affordable housing. The nonprofit serves more than 8,000 individuals each year. For more information, please visit www.chicanofederation.org or call (619) 285-5600. Connect with us on Facebook, Twitter and Instagram.