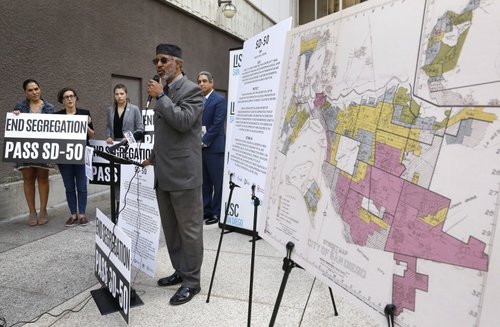 Advocates of affordable housing and civil rights urged San Diego to scrap “archaic zoning policies” that prevent apartments, condos and other multi-unit dwellings in some neighborhoods.

Noting recent research that showed how Washington’s Depression-era mortgage policies fostered racial segregation, Flores displayed a map of San Diego from the 1930s. On the chart, neighborhoods where lending was forbidden were marked in pink. They included Logan Heights, Barrio Logan, City Heights and much of southeast San Diego.

“We still have poor people of color in those neighborhoods,” said Flores, who was chief of staff for former city councilmember Marti Emerald.

After a brief press conference Wednesday, Flores and leaders of the NAACP, the Chicano Federation and California YIMBY urged the council’s Land Use and Housing Committee to adopt a local version of state Senate Bill 50.

Now shelved, that bill would have eliminated “hyper-low-density zoning” in some areas, allowing five-story apartment buildings near public transit stations and job centers, plus up to four homes on land now zoned for single family residences.

Zoning, several speakers argued, was used as a weapon against poorer citizens.

“We have a history of our communities being pushed to the margins of society,” said Nancy Maldonado, the Chicano Federation’s CEO, “and to the fringes of our cities.”